Posted by lieslharr@gmail.com on Jan 14, 2015 in Graphic Design, Portfolio |

Our world is surrounded with objects, and we interact with them constantly. It may be a Cell Phone, or a pair of shoes, or maybe even a random assortment of collectables. Whatever it may be, there is always more that object than what we may see at first glance. For this project, we were to create a visual alphabet out of a object of some sort.

This project gave us the opportunity to design with more than just the tools on our computers. Using a camera, some sort of object, and our creativity, we were to create a story as we displayed the alphabet. For this project, my object was orange peels. Something that more than just having different shapes, has many uses as well. It was fun to have to find different ways to peel the orange in order to get different shapes.

Find the alphabet, don’t have obvious solutions, and then try to draw it! That was the challenge displayed here.  There are a lot of different objects that all of us have lying around, some of which us useful, others aren’t. Some of them offer natural constraints that might be harder to work around, and others you have to create your own constraints. These are just a few observations that I had as I was trying to draw sketches.  There were a few ideas that while still in the thinking stage I thought would be great, until I tried to draw them and realized that I had no idea how that would work. Even the objects that I could make attempts to maneuver and then draw, I found that it was even harder than I thought it would be to make all the letters.

With that being said, it’s still very important to include these sketches in our work. As the saying goes “Proper Prior Preparedness Prevents Poor Performance.”  That preparedness can come in many different ways. Because we had a couple of days to work on it, the first while I just added a list on my phone of what I could possibly use. It’s amazing how ideas come at the most random times. While running, or in the middle of Music class, and in many other different places.  Usually it’s only when we are prepared and ready for inspiration that it comes. With that being said,  the more ideas you have, the more options that you have, and the more good solutions you have to choose from. 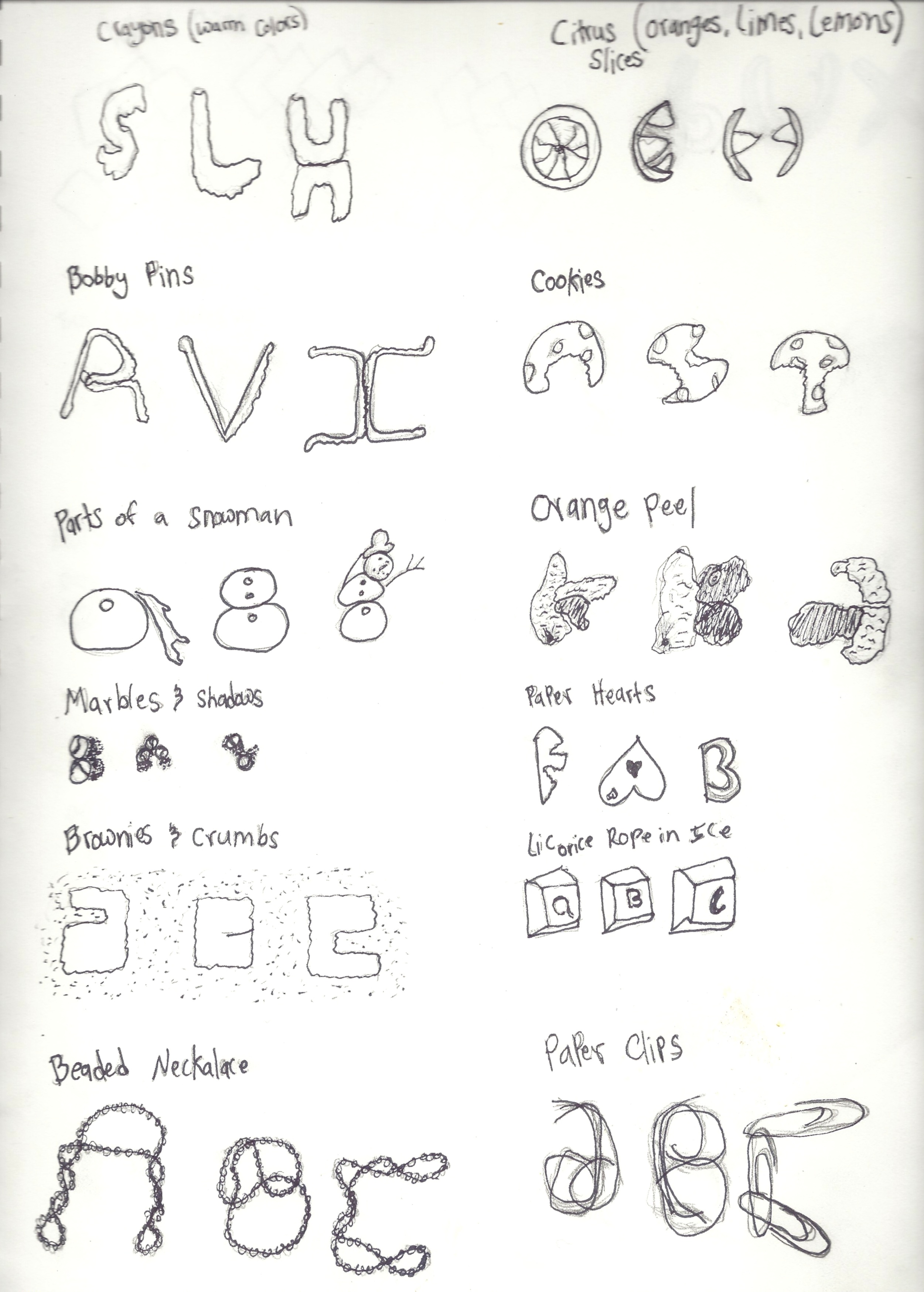 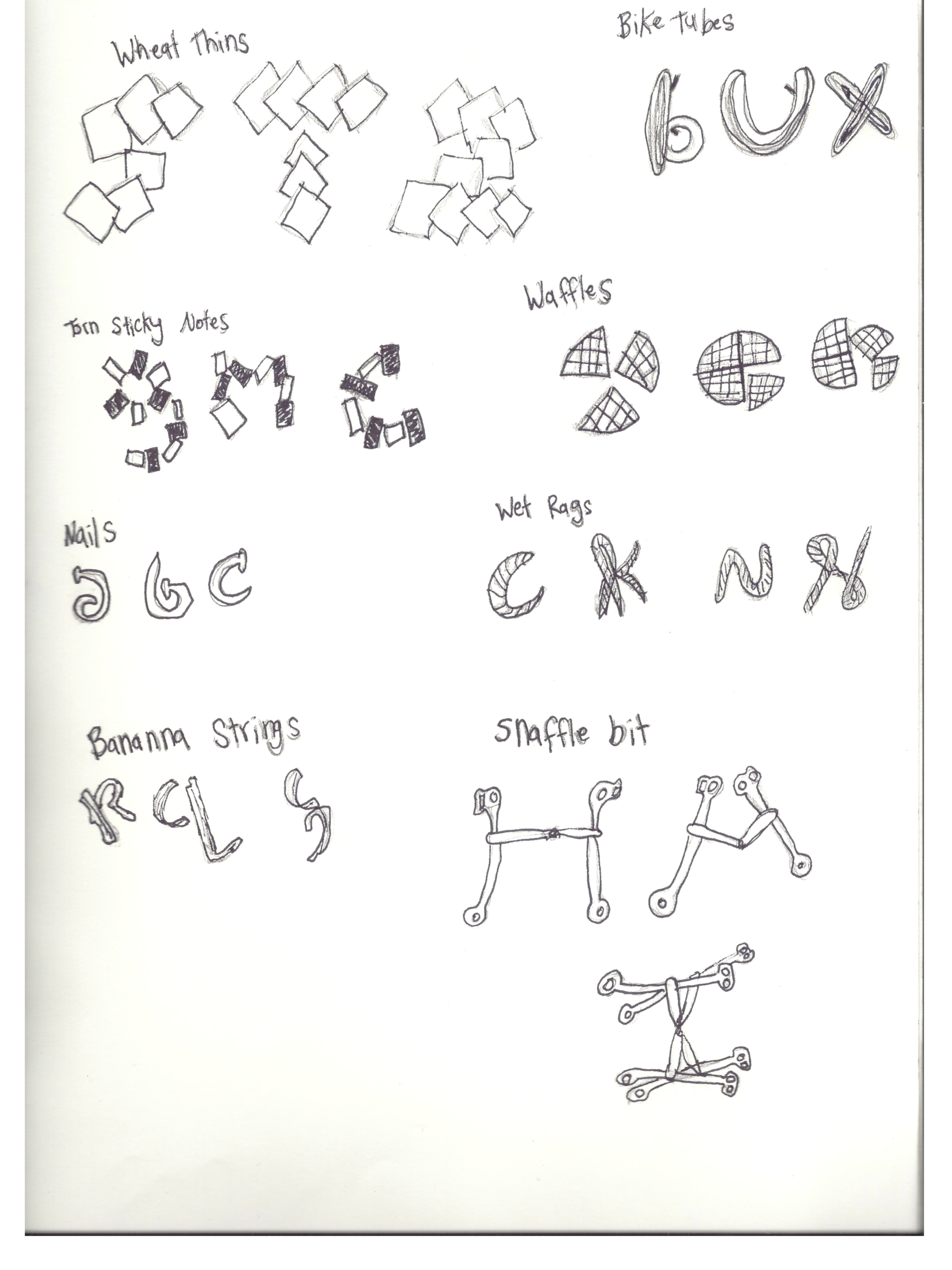 It’s always a little interesting to try and change your sketches to actual forms. Often times I think we find that either the object doesn’t move the way we were thinking, or the proportions are wrong. I think that’s why it is important to try a couple of different options before choosing or getting your heart set on one option. To often we get stuck in what we know, or what we have pictured in our mind that we miss the different solutions placed before us.

As I was experimenting with a couple of different solutions, I found that more times than not, what I had sketched was not what I could create from just that object. That is when – as well as many other times – that group work becomes important. When we use the synergy that multiple perspectives can bring, new ideas. Its also important to remember that we can’t find the right solution until we try many wrong ones. Thomas Edison didn’t fail a thousand ways to make a light bulb. He just found a thousands ways that didn’t work. There is a big difference. One that when we learn, will bring many differences to the way that we work. 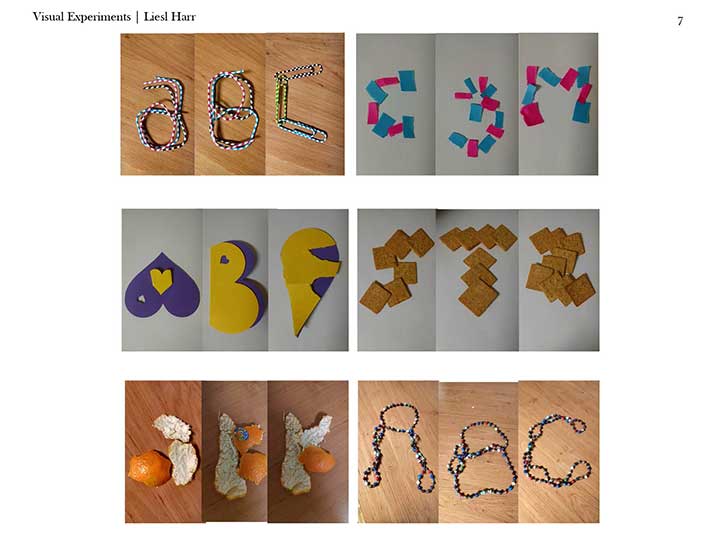 I feel that I need to include some notes here as well. I really like this design, perhaps better than the final product. There were some conscious decisions that I made with this design that others didn’t agree with. To start off with was the white background. Black probably would have set it off better, but I found that I didn’t like that idea very much. When I think of oranges, I think of breakfast, and morning time. Even if it is dark outside when I get up, I still don’t want something dark to start my day off. I think the white background gives it a feeling of a bright, sunny day.

The other thing that I liked was the contrast of both size and color. For me, when I thought of peeling an orange, and the story behind that. Not all oranges peel the same way, and not all pieces of the peel fall to the table the same way. They are almost never the same size, and often they don’t fall in a neat line. I also thought it was more visually interesting to have the variety built in. However these were things that were shot down almost immediately, and I was told to fix, and so my final ended up being a little more organized, and in my opinion less interesting. However this is another lesson for the real world, because I would bet as designers, there are times that a client has in their mind exactly what they want, and sometimes aren’t willing to let that change, and so we create what they want and expect. Even when it may not exactly be what you think will work the best. 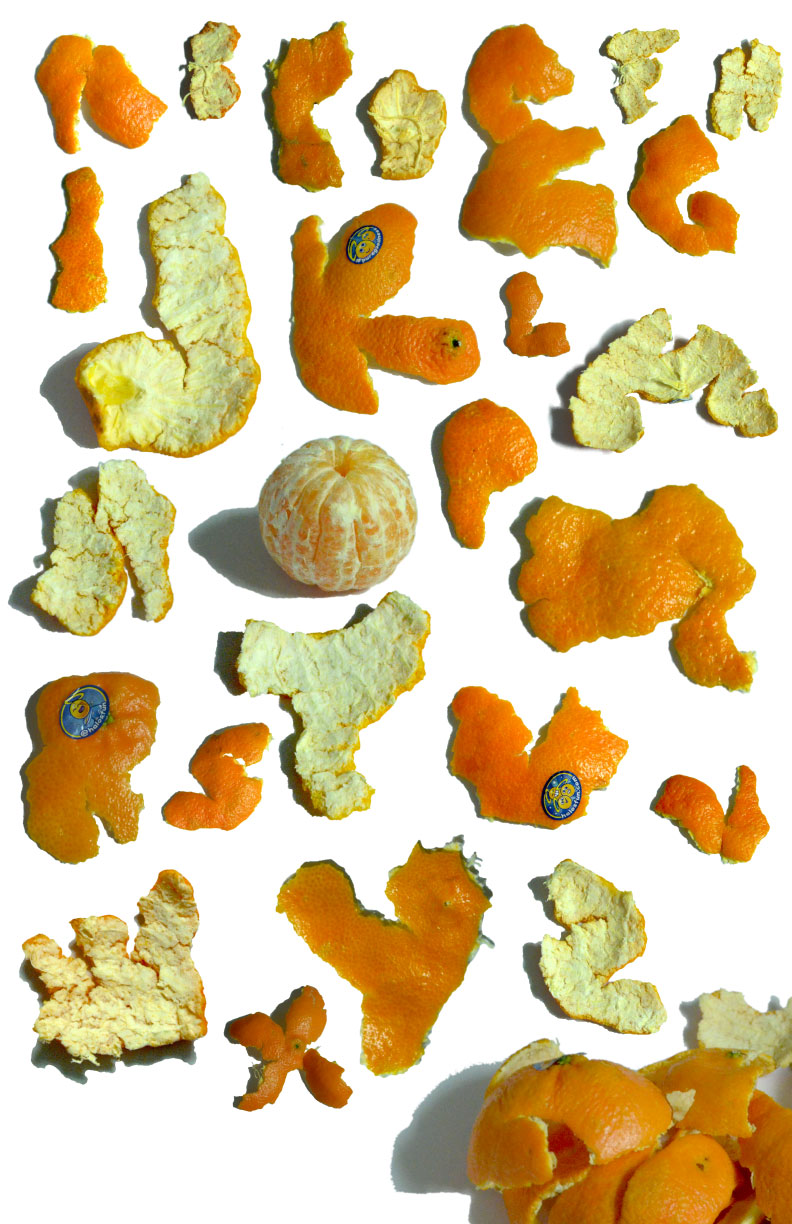 All the steps in the developing process are very important, but I think that this is one of the most important steps. I know for me, once I decide on an idea to follow, I start planning in my head what it is going to be, and often I get stuck there. I can’t seem to find other ways to do the same thing multiple different ways. However, this step forces you to explore other ideas. It helps me see that there are more than one way to do things, and sometimes your first ideas aren’t your best work. I always find that as I push myself to find more ways to accomplish my goal, it gets easier to find new perspectives.

Now with Orange peels, finding variations proved to be fairly simple, even though some letters turned out to be really hard to peel and not have it break in the middle. At first I was only going to use the outside part of the peel, but as I was laying them out, I found that the insides were interesting as well, and created a little bit of contrast and variety to what I had wanted to do with it. 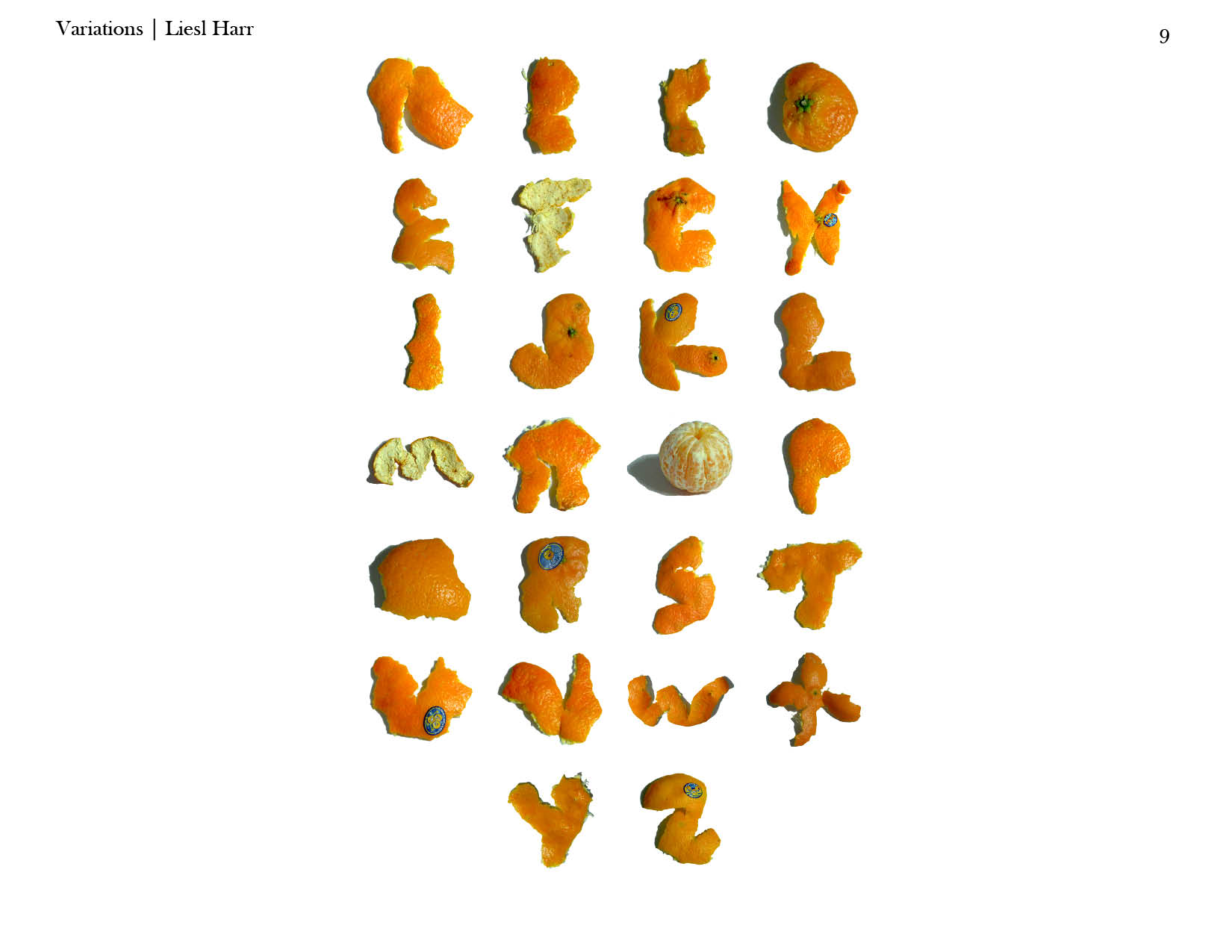 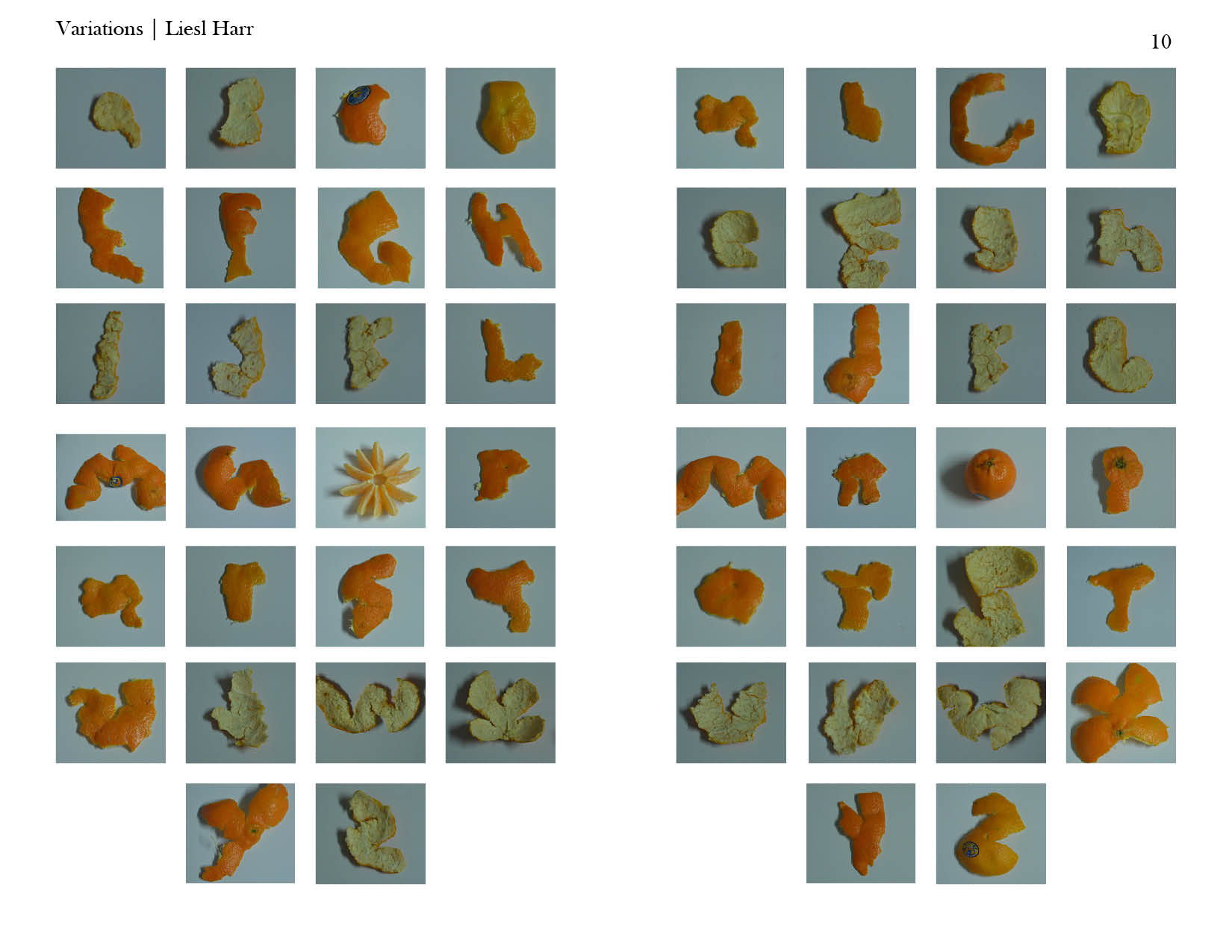 This turned out to be harder than I thought it would after doing all the earlier work. I found that as I started to cut out the shapes, that I had to cut out the shadows differently so I could help them be not quite as strong, and feel more real. I also found that I never had as many variations of each letter as I thought I had. I found myself still taking pictures, and needing more variations because the ones I had just weren’t working. Sometimes it was the wrong side of the orange peel, sometimes it was to big, and other times I just didn’t like the options that I had to work with. By the end of my picture taking, I had a quart sized Ziplock bag completely full of orange peels and my roommates don’t want to see another orange for a long time. I did learn though, in that process that orange peels stay good a long time when you put them in a bag. I was quite impressed.

As I was in Photoshop trying to cut everything out, part of my learning curve was to remember how to use the tools that we are given. Having recently returned from a LDS Mission, I haven’t used these programs for a couple of years, so it was fun to figure them out again. I also learned how important it is to save your progress every step of the way. It makes things easier when you come back and have to change something, if you have saved your selection, or you haven’t flattened the psd file yet, the information is still there so you don’t have to recreate it all. 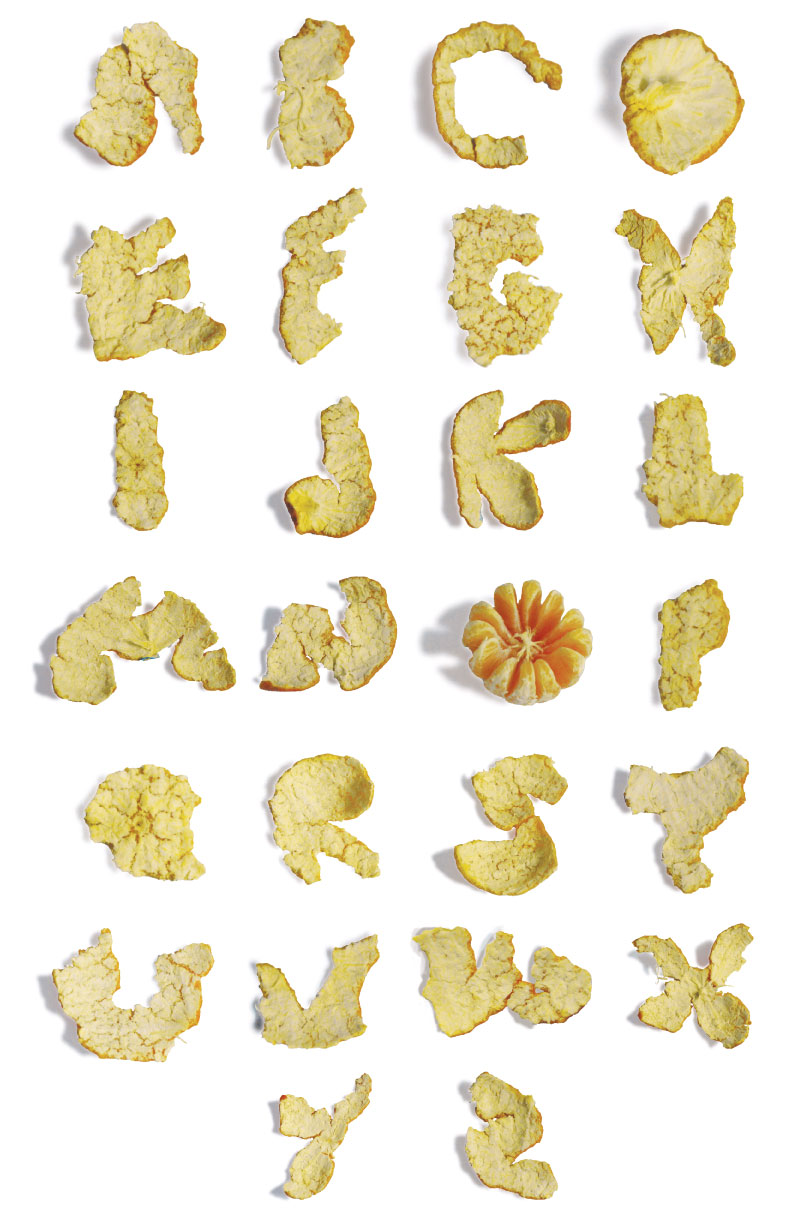 I think one of the biggest things that I learned was that I could do this. Having just gotten back, and being a little out of practice; I have been a little scared to take this class. However, as I have been working on these projects, trying to get everything right, I have found that it’s not as hard as I was anticipating. I think that is the biggest thing I could have learned, giving me confidence to move forward, and realize that yes, it is a lot of work, but it will help me become a better designer, and better able to accomplish things that I will come across as I get into the industry.