Posted by lieslharr@gmail.com on May 14, 2015 in Blog, Portfolio, Vector Graphics |

The task I was given was to create a 12-icon set. This sounds pretty easy and straightforward. I didn’t get any directions on what the icons were for and I wasn’t given a subject. This allowed me to explore a lot of different options.

By nature, icons are simple, relating an idea with as little detail as possible.

I found that the wide-open range allowed for too many options. There are so many different topics, and even when narrowing that range down to my hobbies and interests, it was still too open. I enjoy a lot of things: swing dancing, horses, nature, camping, hiking, biking, swimming, reading, computers, animals, picnics, summer, spring, flower, and the list goes on. Because there were so many directions I could go, I decided to start with some word lists to see what topics I could come up with 12 different objects I could turn into Icons. 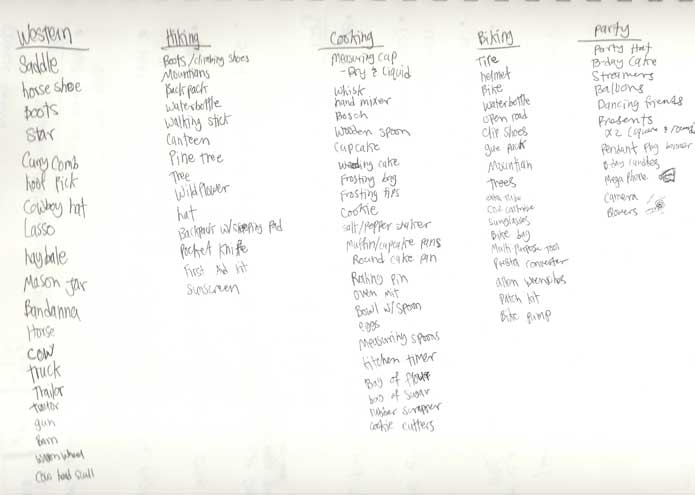 The next step was to start sketching. I picked three topics, and started to sketch. These sketches were scattered all over my class notes, a sketchbook, and any scrap paper that I had around. I find that inspiration hits at random times, and there is no controlling it. Because of this, a lot of my sketches are small and rough with the exception of my sketches for the bike parts which I sat down and tried to get something that I liked. However, after finished that set of sketches, I didn’t like them because of how detailed they had become. 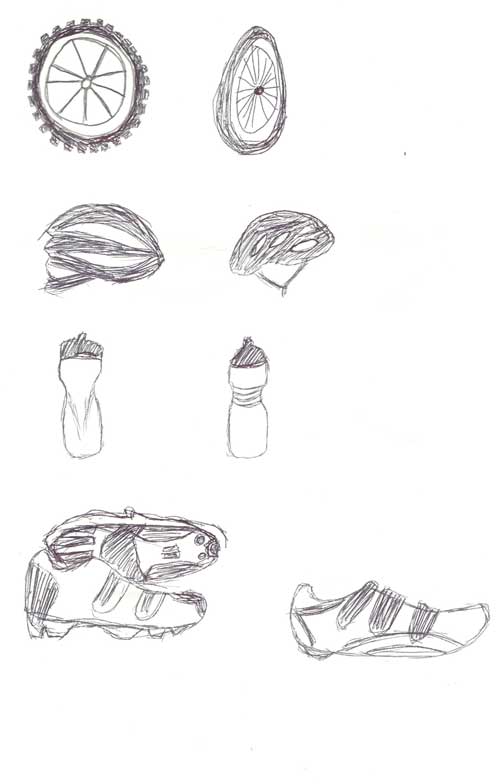 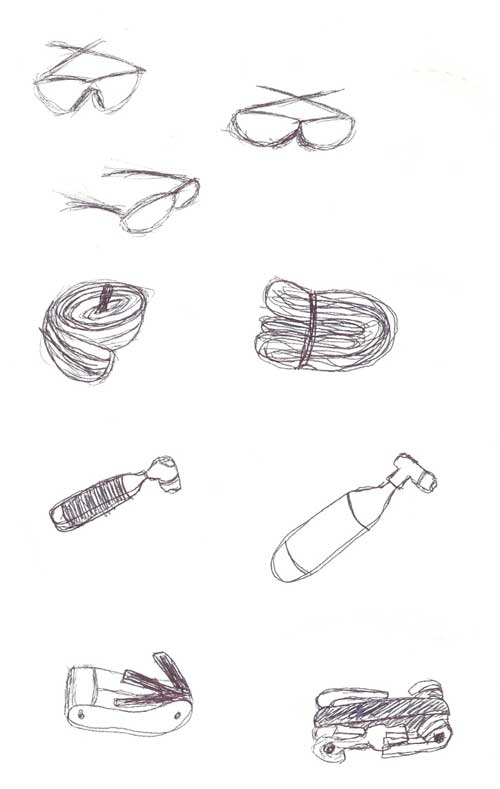 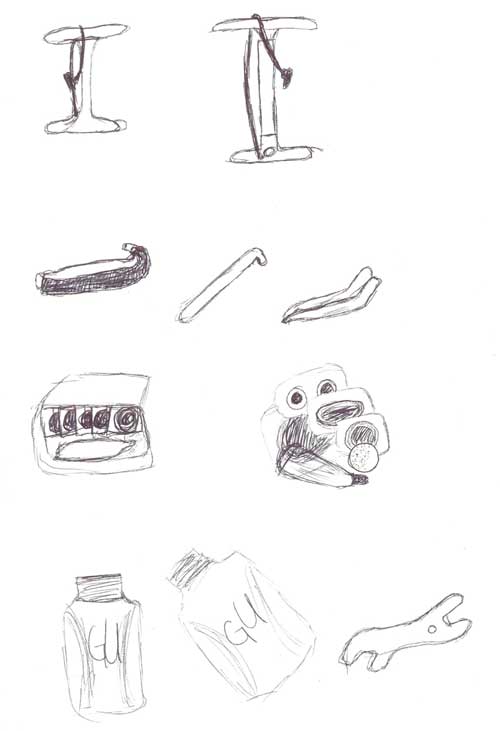 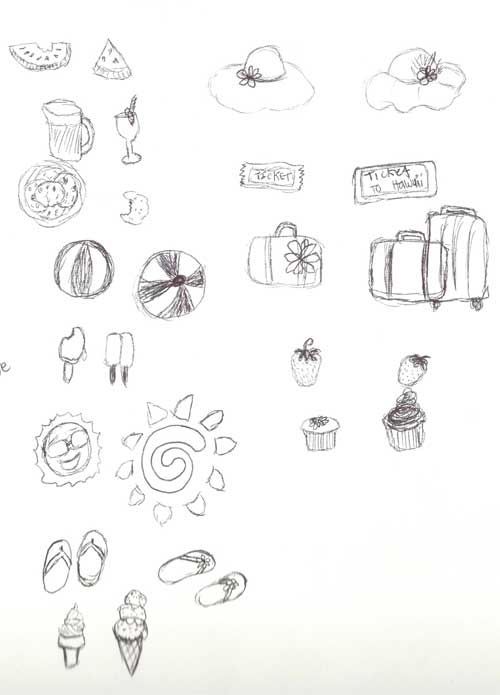 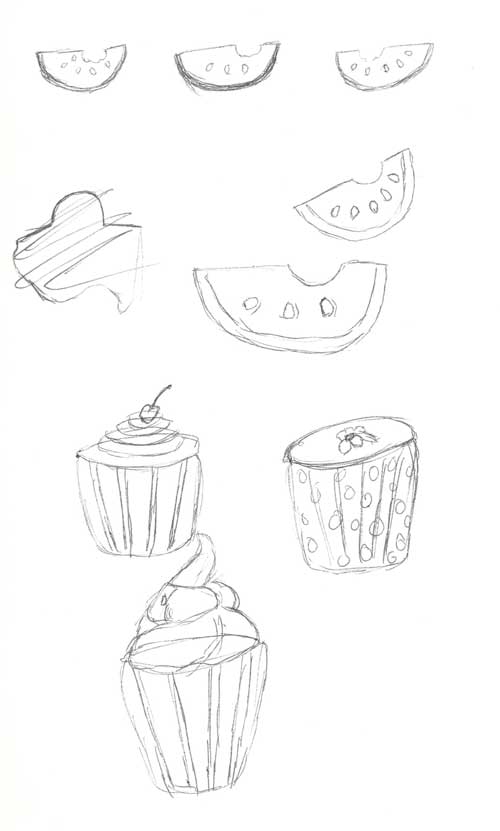 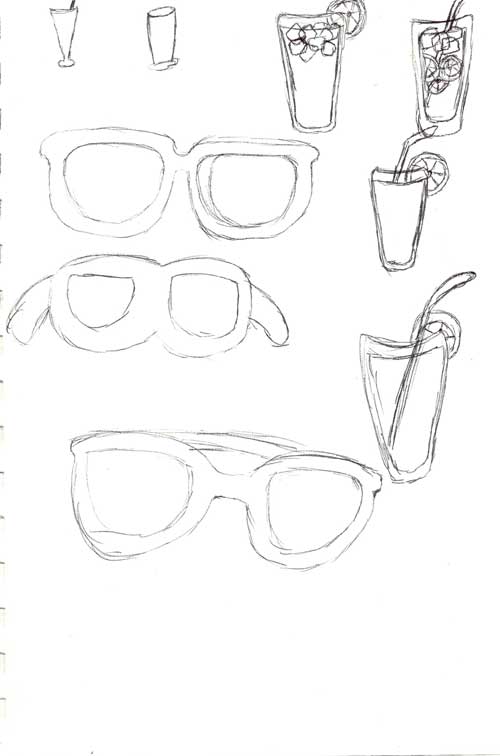 It came time to make digital versions of my sketches, and I still hadn’t decided over a theme. After looking over my sketches, I decided to go with the summer theme. I originally chose theme because they were simple shapes. Or so I thought. As I have tried to implement other ways of creating work, I decided to try and use mostly the Shape tool and the Shape builder to create my icons as opposed to my usually default to the pen tool. This would give more of a geometric feel, and create cleaner edges. It wasn’t as easy as I thought it would be. I got the first draft of 6 icons completed, and was stuck. Although I thought they looked ok, I wasn’t sure what to do next, and I was still trying to find a style to unite the icons into one group.

I continued to work on this project, and decided on a few constraints that would untie the group. These included: the use of green in every icon, using only the colors in a regular food coloring pack and a neutral color, having a 1 pt stroke on everything, and they were all either tilted or had some element tilted to a certain angle. I added the color, played with the placement and order of the icons for a long time trying to get the colors to work out, and have the whole set balanced, and posted it for review by my classmates.

The only feedback I got was to take off the stroke and define the shapes with fill and value. This took out one of my restrictions, and created a new one. So I worked with that for my next draft. It was a little more difficult because I was using the stroke to define my shapes more than I should have, and I had some icons that were white on the outside, which doesn’t work without the stroke. After making some changes to allow the icons to be easily recognizable, I finished my next draft with these.

This is good, but not great. Although I tried to get the shapes to define themselves while keeping my previous restraints, it didn’t work as good as I had hoped. So I reworked them adding some other unifying factors. For example, all of my final icons have a green outside stroke, with no stroke on the inside. I also tried to use different values of the same color to define the shape more and help them be more 3 dimensional. My final icons turned out better than the previous drafts, and I think they are a cute collection of summer items.

Through working on this project I learned how to use new tools in Adobe Illustrator, how to create simple icons with the same style for a united feel, and that it is important to pay attention to detail. It isn’t always easy to get graphics exactly how you want them, but it is possible.. Adobe Illustrator is a powerful program that has many different uses. I am excited to have learned yet another set of tools for future use.