When we were told to come up with our own project for the final piece, I was told in my Book of Mormon class to do the same. I decided to combine them to do a graphic of a scene from the Book of Mormon. I had a couple scenes in mind, ideas of what I wanted to do, and I was excited to  started sketching to see how they went. We weren’t given any directions or project requirements, it was all left really open. This pushes you to explore new ideas, and think outside the box.

My first Idea was to depict the Savior coming to the temple. I love this scene, but I also felt it was intimidating to try and draw the Savior, even from the back, so I decided against that one. I loved the idea of trying to draw Ammaron when he tells Mormon about the plates, and charges him to remember what happens and keep the record. I think there are a lot of lessons that can be learned, the biggest being that we all have a purpose to fulfill while here on earth. Other scenes I tried include Abish gathering the people trying to share her testimony, A simple illustration of the scripture “Which hope cometh of faith, maketh an anchor to my soul”, a visual for the vision of the tree of life, Mormon overlooking the land of his destroyed people, and Ether hiding in the cavity of a rock.

Of all the scenes, I was drawn to the one of Mormon overlooking the destruction of his people. I felt it had a lot of potential, but I didn’t know how to make it happen. I had a really rough draft I did to post to the discussion board, just to see what others thought of it. Still needed lots of revisions, and felt really flat. I didn’t get a lot of feedback from others. The main one was to fix his hand, at least make it rounded instead of a square end. I think this is a good point that will be implemented soon. 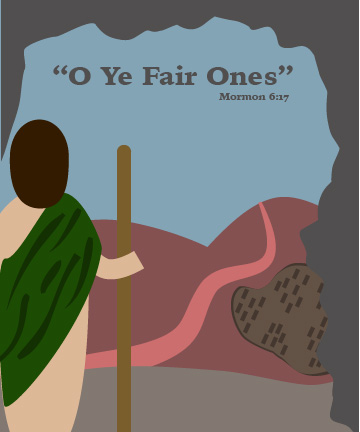 I ran out of time to make all the revisions that I wanted to before turning this project into my Book of Mormon teacher. Based on my roommate’s opinions and suggestions, I added some texture, and tried to make the landscape show the destruction of the scene. The path down the middle is supposed to be a river, but I felt like it was too bright for the rest of the graphic. Also I didn’t like his clothes at all. Despite all this, I think it is an improvement from the first draft, and getting a lot closer to passing for a final project. 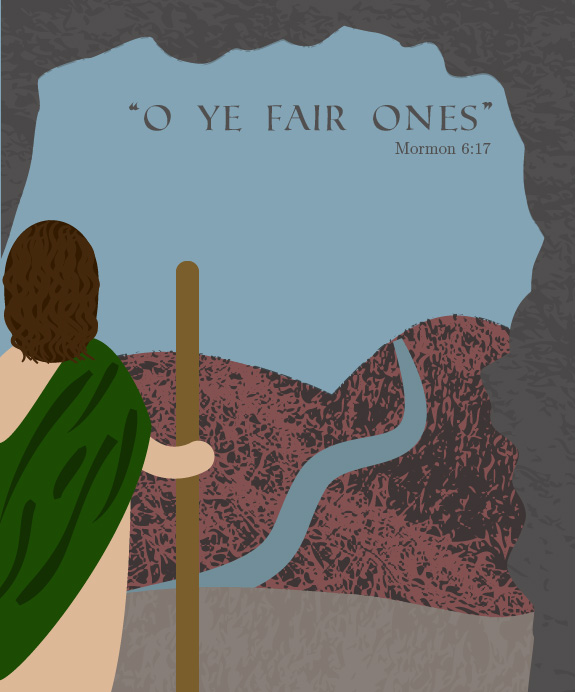 As far as revisions on this version, I continued to work on the river a little bit. The scripture talks about there being so many dead that the river ran with their blood. Hence the red tint to the water. I focused mostly on Mormon this go round. I got some reference pictures from the bible videos the Church puts out, giving me some more ideas about what the back of their clothes would look like. 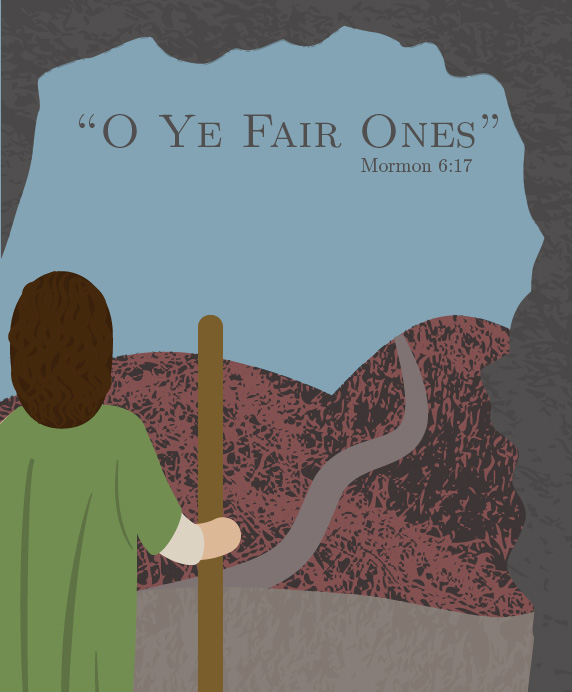 The title of this project comes from the Book of Mormon scripture, Mormon 6:17. This scripture comes after Mormon has witnessed the destruction of almost all the Nephites, and is morning their loss. He follows it by lamenting: “how could ye have departed from the ways of the Lord! O ye fair ones, how could ye have rejected that Jesus, who stood with open arms to receive you!” I chose this scripture because I think it is a great reminder of the importance of obeying the Lord, and heeding the prophet’s counsel. We have never moved too far away from our Heavenly Father to be accepted back into His loving arms. They are always open to receive any who seeks Him.