Posted by lieslharr@gmail.com on Nov 25, 2015 in Blog, Featured, Product Redesign |

Just in time for Thanksgiving, my modernized Baking Soda is ready to be used this season. This was a really fun project, and challenged me to find different uses and applications for a product I use mostly for baking.

Our task was to redesign the packaging for a product, and because I have always hated the Baking Soda box, I chose to do something about it. I learned along the way that the box has been in use for a very long time, and I’m sure it is nice for some uses, such as leaving it in the fridge as a deodorizer. However, my family uses it mainly for baking, and I can’t tell you how many times I have spilled Baking Soda all over because there is no way to close the box, or how inconvenient it is to use with a measuring spoon.

A couple of things I knew right away was that I wanted to change to a plastic bottle – like many other spices you would use in your kitchen – and I wanted to stay with the branding because it is so well known. I didn’t even realize until doing research that there are other brands of Baking Soda than the orange Arm & Hammer box. So my first step was to sketch different types of bottles I could use. I won’t include those sketches here because they are really rough and not very high quality, but I did explore a few different options. Once I decided on a package, my next step was to play with the labels I would put on the container. 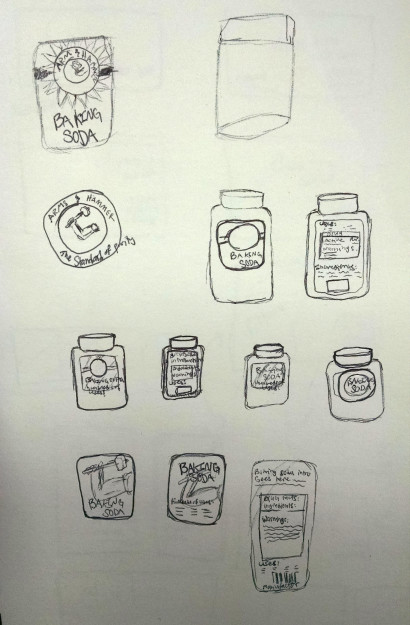 With these I debated between keeping the whole logo, or changing parts of it as you can see in the sketches below. I played around with a few of them, but ended up taking parts of all of these for the final product.

Usually I would have a little more to show here, but for this project, I didn’t really settle on anything enough to save a version. I built on what I had a lot, and changed things around, but didn’t save any drafts along the way. I knew I wanted to stay with the main branding, so I started with the image above, and just started taking away all the extras, coming out with the following label. 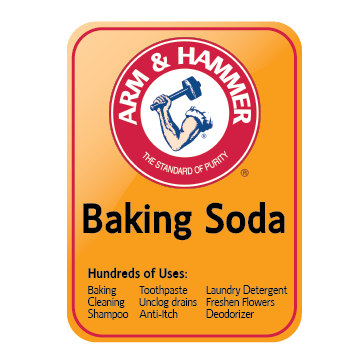 Once I got to this point, I edited, rearranged, and played with the different elements until I came up with the final design. The back label was tricky deciding what information to put there. Because there are so many different uses, it needed both drug facts and warnings, as well as the nutrition facts. On the box they solve this problem by putting one set of facts on the back, and the other on the side. The new package only had a front and back label, so I needed to be very efficient with my space, including manufacturing information and a bar code as well. In the end I think it turned out nicely. There is a lot of information, but it doesn’t feel to overwhelming. 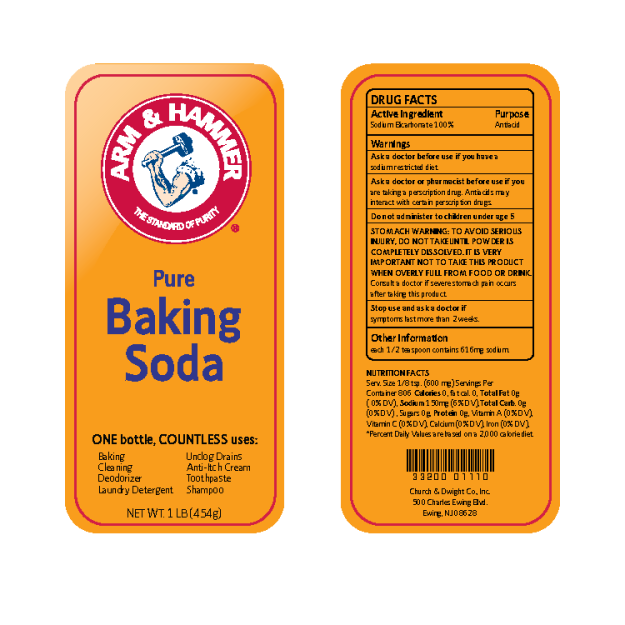 Next was to create an advertisement for the product. This one was harder than I thought it would be. I feel like Baking Soda is something that doesn’t really need to be advertised, and all the examples I found were advertisements geared toward cleaning in some way. On the original one pound box I noticed it had advertisements for a free copy of Better Homes and Gardens or Martha Stewart Living. I decided there was a possibility the advertising could go both ways, so I designed for one of these magazines. However, I also wanted to stay super simple and clean with the look as well. I made a few drafts, the best of which are pictured below. 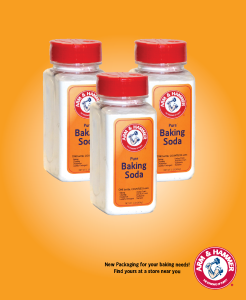 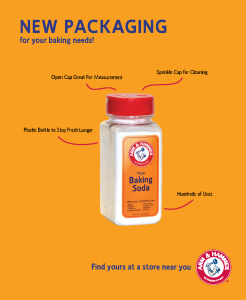 These drafts were a good start, and had a little of what I was going for, but weren’t quite making it. The background felt flat, the first one had a gradient that I didn’t want to include, and the last one felt like there was still too much. So I simplified the text, and added a background texture like the Baking Soda itself, played with sizing and placement, and came up with this final advertisement. 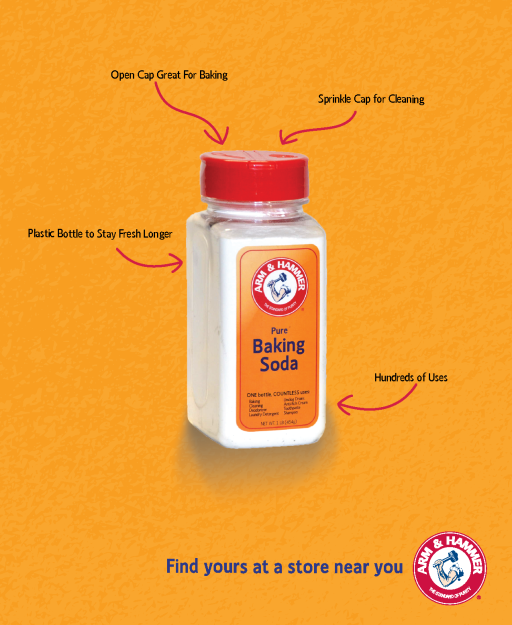 The final piece to this project is they style guide booklet. I took elements from the label, and turned it into a booklet outlining a brief history of the brand, my target audience and goals, some style rules, pictures of the packaging, and the advertisement to wrap it all together.