Posted by lieslharr@gmail.com on Oct 30, 2015 in Blog, Featured, Infographic, Portfolio |

Charleston: Icon of the 20’s

I’m addicted to dancing, specifically swing, ballroom, and country. This was a fairly new hobby for me that I have developed during my time here at BYU-Idaho, where we are spoiled with dances nearly every night. So, I decided to do an infographic for one of the dances. I have learned swing this year, and I love it, so I decided to focus on Charleston, a type of swing that became popular in the 1920’s.

The only requirements we had for this infographic is it must include at least 3 graphics and a stylized graph. I had a few weeks to complete the project, but once I picked my topic, I seamed to have a really hard time focusing on what I wanted in that infographic. I bounced back and forth between doing a “How To” and a “Did you know” infographic. I did a lot of research, finding that there is a lot of contradicting and copied information out there about Charleston. Even the origins have mystery behind it. Some say it has been around in some form from the 1500’s, others say it started in Africa in the 1800’s, and the most common is that the base steps were developed on a small island off the coast of Charleston South Carolina by a group of African American’s in about 1903. You can see some of the visual research I did, as well as my final infographic here.

I was able to do a few layout sketches, and gather ideas from a lot of different places. Most people I talked to wanted something about how to do the Charleston on the poster. I was leary of this because every source I had found trying to describe it (as opposed to teaching in a video) where fairly unsuccessful – I wasn’t able to understand what they were trying to say. I debated displaying facts like famous movies where they danced the Charleston, or doing a section on each era since the 20’s and how it has evolved over time. In the end, I decided to stay with the basics of Charleston. 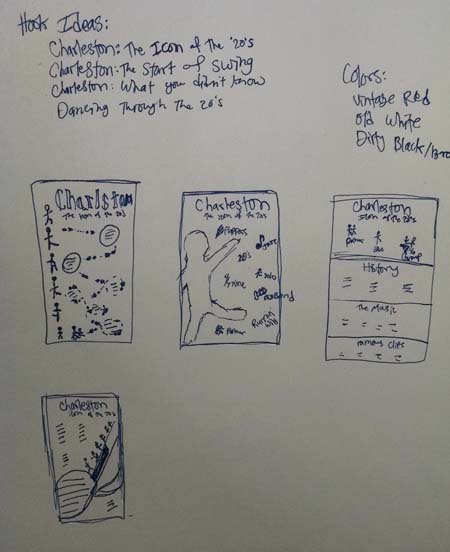 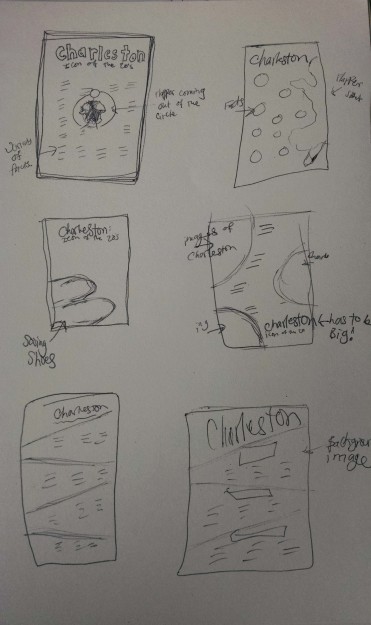 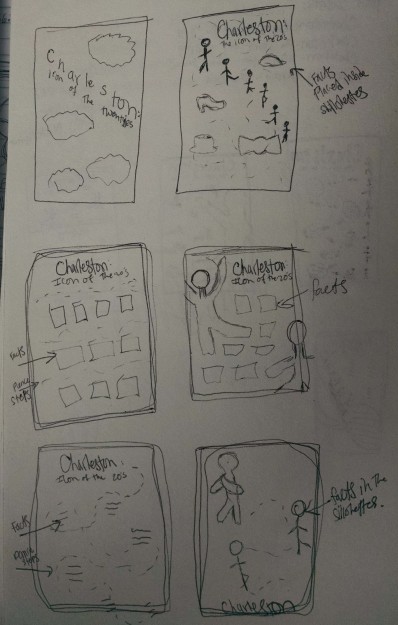 After sketching, I started to get try some different layouts, but didn’t like anything I tried. I kept getting stuck, and the design felt really flat. I knew I wanted to follow some of the 1920’s style, but that was about all I knew. I played around with different graphics, and tried desperately to find some sort of hard data for my graph. After working for many hours, and having a great start to my project, my computer crashed and I lost all my work on that file. This started a very long week and a half of fighting with my computer, rationalizing that it was working enough (It just took forever), that I didn’t have the time to go get it fixed until after this project (and other projects I was working on at the same time) was in. That logic failed me, and I ended up losing my project about 3 times when they were trying to save so I could upload them to dropbox. The only draft I got to stick around is below:

This was try 2, before I lost it again that night, having to start over, yet again. I decided to stick with this layout though, simply because I had already made a lot of the needed design decisions, and I was running out of time.

After my computer decided to stop working all together, I found myself with at least three major projects that needed my design attention, and no computer to do it on at home. So the next 3 days I confined myself to various labs on campus. This was not my only project that I lost work on, and other projects were of more pressing importance, so I yet again became way behind schedule. Today, I focused in on this project, and found that a lot of my decisions were changed, but I am happy with the overall turn out. 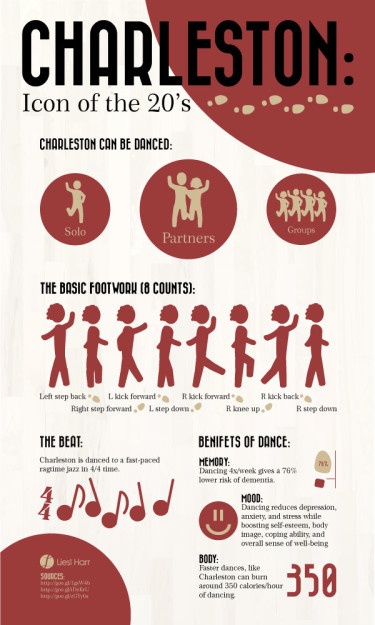 I still have a lot of work before this is up to par, but I think with everything that has happened, I am happy with the way it turned out. I showed it to my roommate, who is a art illustration major, and her favorite part was trying to learn the Charleston, and she did pretty well with no other instruction. I hope to go back and rework this project soon to see what else I can do with it.